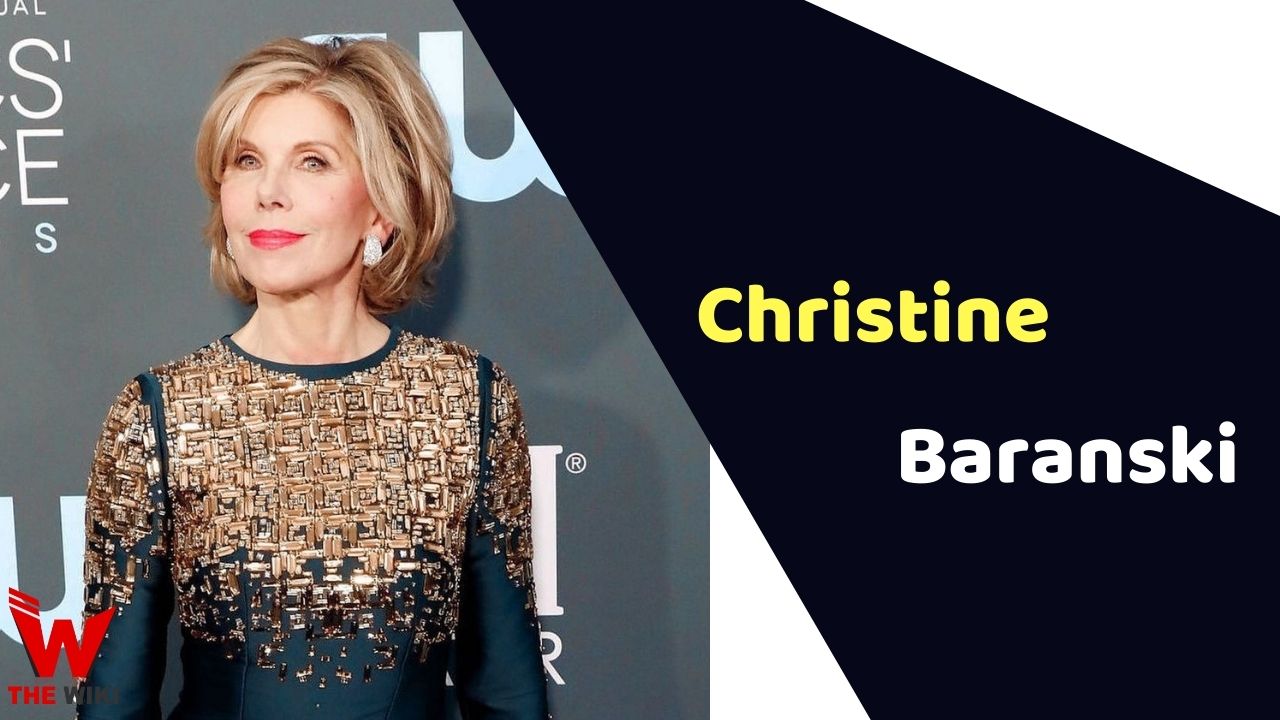 Christine Baranski is an American actress, comedian, producer, and singer. She has been nominated fifteen times at the Primetime Emmy Awards. She is winner of Primetime Emmy Award’s 1995 Outstanding Supporting Actress in a series of comedies starring as Maryann Thorpe in the sitcom Cybill.

Christine Baranski was born on 2 May 1952 in Buffalo, New York, United States. Her father’s name is Lucien Baranski and her mother’s name is Virginia Mazurowska. She completed her schooling at Villa Maria Academy and graduated from Juilliard School, New York in Bachelor of Arts.

Christine started her career with the CBS TV film Playing for Time as Olga in 1980. She got featured in the sex-comedy film Soup for One as Blonde in Bar in 1982. The Next year, she appeared in the American rom-com movie Lovesick starring alongside s Dudley Moore and Elizabeth McGovern as Nymphomaniac. She acted in the comedy-crime film Crackers as Maxine in 1984. In 1986, she performed as Thea in the erotic romantic-drama movie 91/2 weeks. Christine played the role of Connie Chasseur in the 1994 black-comedy film The Ref. In the same year, she appeared in the drama movie The War as Miss Strapford in 1994. It is a tale of passage to adulthood that took place in Mississippi in the 1970s.

The Next year, she portrays the role of Ann Marwood Bartle in the gay romantic-comedy film Jeffrey in 1995, based on a play portraying Richard Jeffrey’s life and times. From 1996 to 2010, she was appeared in many films like The Birdcage as Katherine Archer, Bowfinger as Carol, How the Grinch Stole Christmas as Martha May Whovier, Bonneville as Francine etc. She did a Christmas-musical movie Christmas on the Square, as Regina Fuller in 2020.

Christine is quite popular on television and made her debut with the television series Busting Loose as Debbie aired on CBS in 1977. She got later featured in the spy-thriller series The Equalizer as Victoria Baines in Mama’s Boy episode in 1985. From 1995 to 1998, she appeared in the series Cybill as Maryann on CBS. It centers on the life of Cybill Sheridan and for than she won award of Outstanding Supporting Actress in a Comedy Series at Primetime Emmy Award. She starred in the series Welcome to New York as Marsha Bickner, producer of AM New York, in 13 episodes from 2000 to 2001.

From 2003 to 2004, she played the role of Annie Brennan in the series Happy Family for 22 episodes. In 2005, she appeared in the supernatural series Ghost Whisperer as Faith Clancy in Voices The Crossing. She starred in the popular series The Big Bang Theory as Dr. Beverly Hofstadter from 2009 to 2011.

Christine Baranski and Matthew Cowles exchanged wedding vows during a marriage ceremony in 1983. The couple has two daughters named Isabel and Lily.

Some Facts About Christine Baranski

If you have more details about Christine Baranski. Please comment below we will updated within a hour.